There's horror lurking beneath an abandoned church. Walk away and stay alive or interfere and prepare to run for your life!

"The Dead Samaritan" was made for the Slasher Jam and is inspired by the movie "Jeepers Creepers".

“The Dead Samaritan” is an independent production by Philipp Teich and is not affiliated with Ockult Örtmästare Games or Stockholm Kartell. It is published under the MÖRK BORG Third Party License.

The Dead Samaritan is a one page slasher-themed dungeon for Mork Borg or Slasher Victims.

It's a surprisingly arresting premise, and it works just as well for modern setting as it does for the Dying World. The overarching vibe is Jeepers Creepers-y, and the hook is that you spot an old man dumping a body and check to see whether someone needs help.

There's a few minor combats and NPCs, but they feel like they actually reduce the creepy vibe. The dungeon's ambiance does a much stronger job bringing the horror, and there's traps, claustrophobia, empty spaces, and body horror to keep things intense.

The central monster is maybe a bit strong (421 HP is a lot, and there's nothing that specifically conveys he's meant to be run from,) so GMs may want to play him as a recurring threat rather than a single climactic fight at the end.

Overall, I think this is a fantastic mini dungeon and great fodder for an atmospheric one-shot or mini-adventure. Pick it up if you can.

Whoa, thank you so much for your kind words! I'm glad you like this. Yeah, the HP of the boss are very high (and itvs a "quote" from the movie) and it is indeed intended to possibly be chasing the players for a while (just like the creature in the movie is not up for a final fight) . 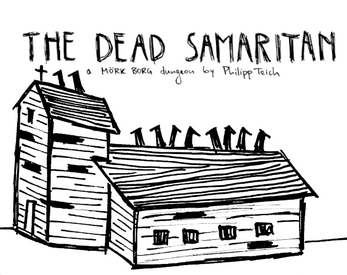